da | | Board of Directors ita 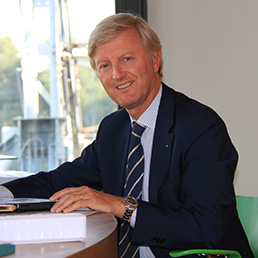 Fabio Massimo Grimaldi, born in Turin, after graduating in Civil Engineering-Transport, obtained a Master in Business Administration and since 1980 he has been enrolled in the Order of Engineers of the Province of Turin.

He has many years of managerial experience in private companies in the general construction sector and in the aerospace sector.

From 1987 to 2012 he was Managing Director and Attorney General of Impresa Rosso S.p.A.

From 1998 to 2005 Vice President of I.T.P Agency for the attraction of foreign investments in Turin and Piedmont.

From 2001 to 2006 President of MKTP – Territorial Marketing S.r.l, a consulting, training and service supply company in the field of territorial marketing.

In 2001 he entered the aerospace sector becoming President of ICARUS S.c.p.A., a company created for the construction and management of the Engineering Center in support of the ISS, International Space Station, where he remained until 2006, again holding the position in 2014.

From 2003 to 2009 he was a Director of ALTEC S.p.A, whose shareholders are now Thales Alenia Space and ASI, the Italian Space Agency.

He also held the position of Director of the Piedmont C.E.I.P. PIEDMONT, a company set up by public bodies for the promotion of the regional territory and for the internationalization of businesses.

From 2011 to 2014 he held the position of Chief Executive Officer of ENVIRONMENT PARK S.p.A., a public company that manages the scientific and technological park for the environment in Turin.

He is founder and CEO of FMG Strategy, a strategic consulting company for companies.

Since September 2014 he has been a member of the Turin Aerospace District.

Since December 2015 he has been Provincial Councilor of Federmanager Piemonte.

He was Vice President of the Young Entrepreneurs Group of Confindustria and Ambassador of Turin appointed by the Mayor for the XX Olympic Winter Games in Turin 2006.

In 2014 he is co-inventor of the “Plasma Sky” patent, development of an industrial process with Plasma gas, capable of modifying the functional properties of the surface of the ski insoles, to improve their speed.